Normally I write my content 100 percent. That said, the problem of ethanol and phase separation is widespread it’s pointless for me to put it in my own words. In an unusual move the content on this page is derived from external sources. If you don’t wish to read everything understand the following.

If you put gas station fuel in your small engine and it sat for a few months and now wont start or stay running the problem is simple.

The Ethanol in your gas corroded your carburetor. The carburetor needs rebuilt or replaced.

Phase Separation – Gasoline with Ethanol has a 30 Day Shelf Life!

Yes you read that right. Gasoline with Ethanol has a 30 day shelf life. Do not buy more gas than you can use in 30 days. The fuel breaks down into separate components gasoline and ethanol. 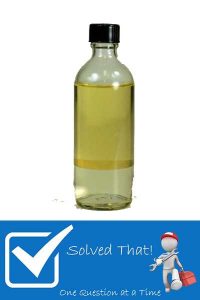 Phase Separation – Gasoline E15 with 15% Ethanol is What You Buy at Your Local Gas Station!

Unless you go to a gas station that has a special dedicated pump like CAM 2 racing fuel you are buying fuel with Ethanol.

Phase Separation in Gasoline’s containing Ethanol is a major problem for all users of gasoline. 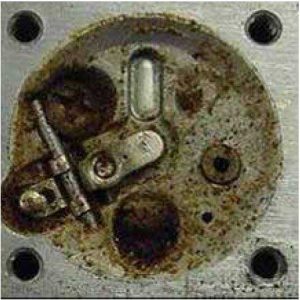 Whether you use gasoline as a fleet operator or for your family car, classic car, boat, personal water-craft, motorcycle, snowmobile, ATV, RV, lawnmower, weed-whacker, generator, or any of the thousands of other types of equipment that use gasoline engines; you are being affected by Ethanol in your fuel.

Phase Separation describes what happens to gasoline containing Ethanol when water is present. When gasoline containing even small amounts of Ethanol comes in contact with water, either liquid or in the form of humidity; the Ethanol will pick-up and absorb some or all of that water. When it reaches a saturation point the Ethanol and water will Phase Separate, actually coming out of solution and forming two or three distinct layers in the tank.

Phase Separation is also temperature dependent. For example, E-10 can hold approximately .05% water at 60°F. To better understand the amount of water that we are talking about, picture 1 gallon of E-10 at 60°F. This gallon will hold approximately 3.8 teaspoons of water. However if the temperature drops to 20°F it can only hold about 2.8 teaspoons of water.

We recently were called to consult for a fleet where a fairly large number of vehicles were being regularly fueled from a single tank and about one-half the vehicles were stored inside and the other half were stored outside. After a night with a 30°F+ temperature drop, several of the vehicles stored outside developed problems with significant amounts of water found in the vehicle tanks. After checking the storage tank and finding no measurable water, they looked for other possible causes including sabotage. After looking at many possible causes this customer consulted with us and we were able to describe the Phase Separation through temperature change scenario and determine that this was the most likely cause of the problems.

Phase Separation can happen in an underground or an above ground storage tank, a vehicle tank, a boat tank, in any type of equipment tank, and even in the gas can in your garage.

When this happens, you can have serious and even catastrophic engine problems, without warning.

When this Phase Separation occurs you will have an upper layer of gasoline with a milky layer of Ethanol and Water below it, and then in many cases a third layer of just water at the bottom.

If this happens and you try to start the engine you can have one or more of the following problems. If your fuel tank pick-up tube is in the water layer, most likely the engine will fail to start. If the engine is running and suddenly draws water you can have damage from thermal shock or hydro-lock. If the pick-up tube draws the Ethanol-Water mixture or just Ethanol you can have problems where the engine will operate in an extreme lean condition, which can cause significant damage or even catastrophic failure. If the pick-up tube draws the gasoline, it will operate very poorly due to lower octane that is the result of no longer having the Ethanol in the fuel.

Ethanol is a strong, aggressive solvent and will cause problems with rubber hoses, o-rings, seals, and gaskets. These problems are worse during extended storage when significant deterioration will take place. Hoses will delaminate, o-rings will soften and break down, and fuel system components made from certain types of plastics will either soften or become hard and brittle, eventually failing. Fuel system components made from brass, copper, and aluminum will oxidize to the point of failure.

Operators of boats with fiberglass fuel tanks built before 1993 can have actual structural failure as Ethanol will break down and pick-up some of the materials the tanks are made from. This causes two separate but equally serious problems. First the tanks can become so weakened that they can fail. In cases where the tank is part of the boats structure we have seen tanks become so weak that it is possible to collapse part of the deck just by walking on it. The second problem is that this material when dissolved from the fiberglass tank is carried through the fuel system and can cause damage to carburetors and fuel injectors and can actually get into the combustion chambers causing damaging deposits on valves and pistons. This material can be nearly impossible to remove without destroying the affected parts.

Two-Cycle engines have a special problem with Ethanol blended fuels. Two-Cycle engines function because the oil added to the fuel bonds to the engines metal surfaces and provides barrier lubrication to all the parts requiring lubrication. When Ethanol is added to the gasoline, it displaces the oil and forms a primary bond with the metal surfaces. This bond provides virtually no lubrication and can result in significantly increased wear and even catastrophic failure in a very short amount of time.

Until now the only preventative measures available to tank operators and end users was to try and make sure there was no water in the tank and that vents allowed a minimum amount of airborne water (humidity) into the tank.

Ethanol has less energy (as measure in Btu’s – British Thermal Units) per gallon than does regular unleaded gasoline. This means that the more Ethanol found in fuel the worse your fuel economy will be. You use more gallons of fuel containing Ethanol to go fewer miles.

This poor fuel economy is made worse by other EPA and State requirements for fuels to change seasonally. Until very recently we have used what is known as “Conventional” gasoline (CVG) in the winter and “Reformulated gasoline (RFG) in the summer. The theory is that the lower volatility of RFG will reduce the formation of green house gases. However RFG has lower Btu’s per gallon. RFG together with Ethanol results in a significant mileage penalty. My own vehicle drops about 2 miles per gallon or about 9% when using RFG with Ethanol.

For many years the refining industry used a chemical called MTBE to meet the oxygenate requirements set forth by the EPA. Generally refiners used 15% MTBE and 85% gasoline. However MTBE has now been virtually eliminated in the US due to its carcinogenic compounds and the huge potential problems caused by its pollution of as much as 75% of the ground water in the US and Canada.

This has left Ethanol as the primary additive to meet Federal and State oxygenate mandates.

Further the federal government currently subsidizes Ethanol with a $.51 per gallon tax credit that goes to the refiners or blenders. With E-10 this provides those refiners and or blenders with a $.051 per gallon subsidy on every gallon of gasoline that they sell.

In many cases we have seen gasoline containing more than 10% Ethanol. We test regularly and have seen fuel containing 12%, 13%, and even 14% Ethanol while the pump shows only 10%. Increasing the amount of Ethanol increases the refiner/blenders subsidy and profit while further lowering your fuel economy.

One more concern with Ethanol and RFG or Ethanol and CVG is that Ethanol when mixed with water; they readily form Gums in the fuel system much quicker than gasoline without Ethanol. These Gums coat fuel system components including filters, carburetors, injectors, throttle plates; and will then form varnish and carbon deposits in the intake, on valves, and in the combustion chamber. These deposits can coat sensors and plug catalytic converters.

The good news is that we now have products available to prevent and control Phase Separation and that we can dramatically reduce or eliminate most of the problems caused by Ethanol in Gasoline.

Because of all the problems with Ethanol Blended gasoline’s we will list some specific suggestions and recommendations on how to deal with and resolve many of these problems.

When Phase Separation occurs in fuel tank on a vehicle, boat or other piece of equipment, the tank should be completely drained. The tank should be refilled with good fuel and the fuel line purged prior to restarting the engine.

For Seasonal vehicles and equipment, e.g. boats, personal water-craft, motorcycles, classic cars, ATV’s, RV’s, lawn and garden equipment, gasoline powered generators, and so on, we recommend that you try to use conventional gasoline without Ethanol whenever possible and particularly prior to storage.

In ALL Two-Cycle gasoline engines where there is any possibility that you are using gasoline containing Ethanol we strongly suggest using a full synthetic two-cycle oil in the gas.

In bulk storage tanks where you believe phase separation may have occurred or where you are concerned it may happen. We suggest the use of a modified water finding paste such is made by the Kolor Kut Company. This paste starts out brown, if you dip the tank with a measuring stick with the paste and it turns yellow (even light or spotty yellow), you have significant water dissolved in the fuel, if the paste turns red you have free water.

If you have fuel that has Phase Separated and you have either two or three layers you should arrange to have the tank pumped from the bottom to remove the one or two bottom layers containing the water and or the Ethanol/Water mix. (Note: you should check again with the paste before the technician leaves to be certain that all the Water and Water/Ethanol has been completely removed). You do not need to remove the gasoline. Check with water finding paste after 24 hours. If no red or yellow present then add clean fuel to the tank to working capacity.