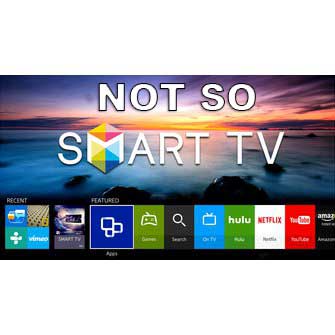 The very first page of this site was devoted to the dreaded “Preparing Your Tv” message on my Samsung Smart tv. Despite solving the “Preparing Your TV Samsung” error message I still found the so called “Smart TV” to be a lousy experience. Enough is enough my time is to valuable to waste waiting for a tv. Since writing the original post there has been a few changes around the house. By changes I mean purchasing a Roku 4 and a 65″ LG 4 UHD TV. This means I now have the ability to compare the Samsung Smart TV to the LG Web OS, Roku 4 as well as my trusty Amazon Fire TV. Ill save the actual comparison of those four for another day. For the purpose of this page and your sanity I will simplify and get to the bottom line. Do yourself a favor and forget about using the built in Samsung “Smarts” and buy either an Amazon Fire TV or a ROKU 3 or 4 depending on your needs. Both devices simply just work. I have a personal preference for the Amazon Fire Tv. The unit is small, powerful and the menu structure makes sense especially if you are an Amazon prime customer or like to buy your streaming movies from Amazon. The thing that really seals the deal is the voice search. I love the Amazon Fire TV. On the other hand if your a Netflix junkie the Roku might suit you better as no single app is prominently in your face like the Fire Tv. Both devices simply and elegantly get the job done.

One more compelling reason to go with the 3rd party streaming device is support. TV operating systems quickly become outdated and unsupported by the manufacturer. folks like amazon, Roku and even Apple will provide updates much longer and much more reliably. 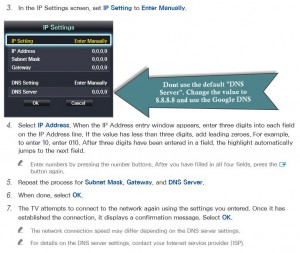